Aga Muhlach played Doc Aga, a young veterinarian stuck with raising his sister's kids. The show spanned a very successful seven years, and starred a now-familiar cast that also included the late Babalu (as the kuripot balut seller, Babsy), Agot Isidro (one of Babsy's kids on whom Dr. Aga has a secret crush), and Claudine Barretto (the teenager struggling with puberty). The show eventually had its own movie in 1996.

We just couldn't get enough of the Kosme family's wacky antics. The sitcom starred the great Dolphy as Mang Kevin, a widower raising five kids in their house along the railroad tracks. The series also featured the comedic talents of Nova Villa as Aling Ason and Babalu as the greedy Richy. Dolphy's real sons, Vandolph and Boy 2 played his fictional kids alongside Gio Alvarez, Smokey Manaloto, and Claudine Barretto.

Hagibis' "Katawan" might not mean much to today's teens but for the teens of the '90s, it signaled the opening credits of this classic sitcom. Richard Gomez, Joey Marquez, and John Estrada poked fun at what it meant to be a man, while exchanging witty lines with female cast members like Amy Perez, Gloria Romero, Cynthia Patag (remember her ribbon?), and Carmina Villaroel. Oh, and the Gwapings joined in on the fun, too.

Abangan Ang Susunod Na Kabanata (English: Wait for the Next Chapter) is a political satire of the Philippine government. It's a situational comedy that depicts the lives of the common “tao” and their interactions with the “demi-gods” of politics. It shows the funny side of the state of Philippine affairs while making viewers very aware of what is really happening to the country. It was aired on ABS-CBN from February 4, 1991 to June 20, 1997. It was re-aired on Jeepney TV

Bida si Mister, Bida si Misis is a Philippine sitcom on ABS-CBN which aired from November 16, 2002 to February 8, 2005. It is a sequel of family-romance comedy Kaya ni Mister, Kaya ni Misis, and reaired again on Jeepney TV every Wednesdays at 9:00 PM to 10:00 PM.

Goin' Bulilit (transl.Goin' Little) is a Philippinesketch comedy program broadcast by ABS-CBN.[1] The show premiered on February 6, 2005, and aired every Sunday nights on the network's Yes Weekend! block. It also aired worldwide via TFC. The gag show featured children in various comedic situations, aiming to provide laughter for the audiences by showcasing gags, sketches, and segments. The cast is composed of child stars, except for Dagul, who portrayed different roles ranging from young to old characters every week to bring entertainment. 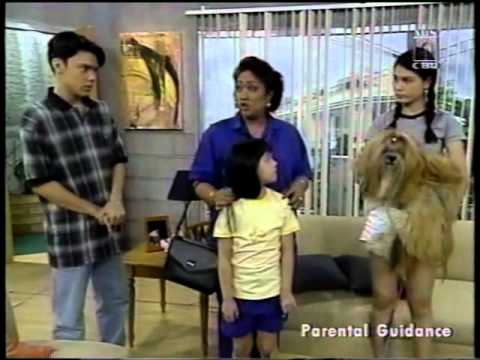 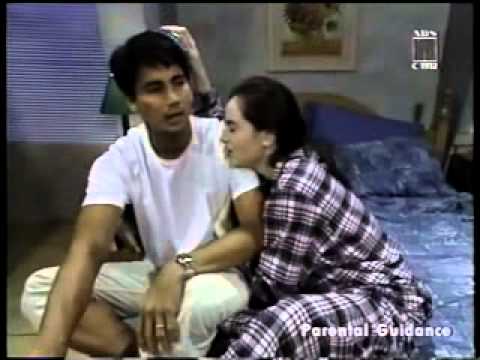 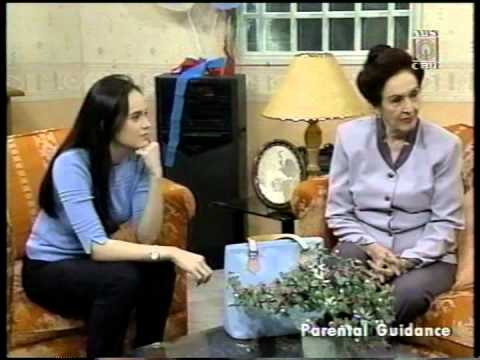 Richard Loves Lucy is a Philippine sitcom on ABS-CBN. The show stars Richard Gomez and Lucy Torres. It aired from November 22, 1998 to March 25, 2001.

Batibot was conceptualized and produced by Feny Bautista, a teacher from the Community of Learners Foundation and writer Rene Villanueva. The show was inspired by the American children's show, Sesame Street which educates preschoolers through dance, song, and role-play educational skills through them.[4]

First aired in 1984, Batibot debuted as Sesame!.[5] It stars Pong Pagong and Kiko Matsing which the characters were based on one of the Filipino stories, The Monkey and the Turtle popularized by José Rizal.[citation needed] In the first year of its airing, the children's show was co-produced by the Philippine Children's Television Foundation and Children's Television Workshop with the support of then First Lady Imelda Marcos. Government support did not last long, ended within 1984 and the co-production deal was cancelled.

Gimik is a Philippine youth-oriented television series produced and broadcast by ABS-CBN. The show ran from June 15, 1996 until February 13, 1999 every Saturday for 1 hour and 30 minutes and was shown international through TFC.

Calvento has won numerous awards such as a Presidential awardee for his contribution in crime solution and a Golden Scroll Awardee for Journalism and numerous awards from law-enforcement agencies like the Philippine National Police and the National Bureau of Investigation.

In 1999, Calvento Files won the top award as best docu-drama category in the 1999 New York Film Festival for the episode "Dying young but not in vain".

Coney Reyes on Camera was a weekly drama anthology that aired from 1984 to 1998 on RPN and ABS-CBN. It was the longest running drama anthology of its time in Philippine TV history until Maalaala Mo Kaya broke the record in 2006. Coney Reyes was the host, lead star, actress and producer.

The drama anthology stars Coney herself. Aside from her, actresses who alternate to play protagonist/central role for some episodes are Jaclyn Jose and Gina Alajar (two of the most respectable award-winning actresses).

Flames (stylized as F.L.A.M.E.S.) is a youth-oriented Philippinetelevision drama anthology show produced and broadcast by ABS-CBN. The series was broadcast from November 11, 1996 to January 11, 2002 every weekday afternoons (formerly primetime).

Ipaglaban Mo! (lit. 'Fight For It!'), also known as Kapag nasa Katwiran, Ipaglaban Mo!, is a dramatization of actual cases brought and settled in the Supreme Court and Court of Appeals. It appeals to the general public because of the wide range of issues tackled. The objective is to inform and educate the masses who have the same experience or people who in the future might get into the same situation.

Kapag May Katwiran. Ipaglaban Mo! was originally aired over IBC on July 11, 1988 and last episode on August 14, 1992. The program transferred to ABS-CBN on August 16, 1992 under Milliard Productions as a blocktimer program. After 52 episodes, the show "premiered" in September 1993 as a station produced program and ended on March 7, 1999, being replaced by Tabing Ilog on its Sunday timeslot.

Maalaala Mo Kaya (transl. Would you remember?; abbreviated as MMK), also known as Memories, is a Philippine dramaanthology series broadcast on ABS-CBN every Saturday evening and hosted by Charo Santos-Concio. It has become the longest-running drama anthology in Philippine television and in the world,[1] reaching its 25th year in 2016. The program features weekly real-life stories or anecdotes of common people or even famous celebrities and personalities through letter sending. The series has a counterpart radio program being broadcast on DZMM called "Maalaala Mo Kaya sa DZMM", a paperback ("pocketbooks") adaptation and a comic book adaptation under Mango Comics & Sterling.

Roderick Paulate was awarded by the 1st Asian Television Awards as Best Drama Performance By An Actor in 1996. He played the role of an indigenous Aeta, a victim of the eruption of Mount Pinatubo.[16]

Roderick Paulate was awarded again by the 5th Asian Television Awards as Best Drama Performance By An Actor in 2000.[16]

Aiza Seguerra was awarded by the 7th Asian Television Awards as Best Drama Performance By An Actress in 2002.[17]

Gina Pareño was awarded Best Drama Performance By An Actress by 12th Asian Television Awards in 2007.[18]

For this episode, Angel Locsin won her first acting award for Best Single Performance By An Actress in the 22nd PMPC Star Awards for TV.[19]

The episode stars Regine Velasquez and Piolo Pascual. Regine won Best Single Performance By An Actress for this episode at the 16th PMPC Star Award for Television The TV Series also serves as a memorable performance for Regine Velasquez as her first MMK episode.[3][4]

John Lloyd Cruz won Outstanding Lead Actor In A Drama Special at the 2nd Enpress Golden Screen Entertainment TV Awards in 2005. He played the role of Jonel, a guy with cerebral palsy, but had a hidden talent in ice skating.[20]

This episode starring Jay Manalo and Joshua Dionisio, won in the 17th KBP Golden Dove Awards. It tells the story of an abusive father who keeps his children working while he spends all their hard-earned money.

Starring Vilma Santos with Maja Salvador. This episode won the Best TV Drama Program at the 15th KBP Golden Dove Awards while actress Vilma won Best Single Performance By An Actress at the 20th PMPC Star Awards for TV in 2006.[21]

Starring Ketchup Eusebio, Gina Pareño, Nikka Valencia and Jan Marini, the episode was nominated as Best Drama Series in the 4th Seoul International Drama Awards in 2009.[22] The story is about a boy that returns to a poor neighborhood in Bicol in order to make his sick mother's wish come true.

A two-part special episodes (Picture and Kotse-kotsehan) starring Angel Locsin and Dimples Romana. Angel won 5 Best Actress Awards from 1st Gawad Lasallianeta, 7th Edukcircle Awards, 2nd GEMS Awards , 26th KBP Golden Dove Awards and 16th Gawad Tanglaw. MMK won Best Single Drama/Telemovie at the inaugural Asian Academy Creative Awards in Singapore. The show’s winning entry is “Kotse-kotsehan” (with international title “Toy Car”), a special two-part episode of “MMK” which depicted the two perspectives of a mother’s love for her children, and topbilled by award-winning actresses Angel Locsin and Dimples Romana. Litrato was about Idai's (Dimples Romana)' quest to find her lost son, while Kotse-kotsehan is about Samina's (Angel Locsin) point of view of the story, in which she found Idai's son and raised him. She was caught with her younger sister Aisah and charged with kidnapping.

Judy Ann Drama Special is a Philippine anthology drama and broadcast from September 13, 1999 to May 14, 2001 aired on ABS-CBN.

The Maricel Drama Special is a Philippine anthology drama series and broadcast which has run from 1992 to May 12, 1997. It is aired on ABS-CBN.[

!Oka Tokat is a Philippine paranormal drama which originally aired on ABS-CBN from June 24, 1997 to July 2, 2002 every Tuesday night. It starred Ricky Davao, Diether Ocampo, Jericho Rosales, Angelika Dela Cruz, Rica Peralejo, Paolo Contis and Agot Isidro. Its title is the reverse spelling of the phrase Takot ako! (I'm scared!); hence, the exclamation point at the beginning. In 2001, the series was reformatted and it starred by the several child stars. It was the longest-running horror series on Philippine television.

Ryan Ryan Musikahan is a Philippine late night musical show on ABS-CBN weekly, which ran from June 2, 1988 to July 1995, hosted by the National Artist for Music and Ramon Magsaysay Awardee Maestro Ryan Cayabyab.

a defunct Philippine free-to-air television network. The network was headquartered in ABS-CBN Broadcasting Center, Diliman, Quezon City. It went off the air on May 5, 2020 and was rejected by the Philippine House Committee on Legislative Franchises on July 10, 2020 for a franchise renewal.

"Angels Live Among Us" Science Calls them Genetic Disorders,The Bible Described Them as Angels